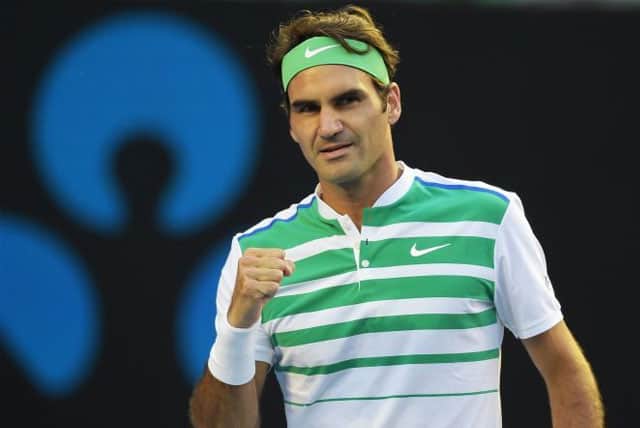 Both matches involve players separated in age by a decade – Federer is 34 and Dimitrov is 24; Berdych is 30, Kyrgios is 20.

Their last encounter two weeks ago to the day in Brisbane was the first time Dimitrov won a set in a tough 6-4 6-7(4) 6-4 loss.

Despite incessant comparisons of their game-styles – especially their one-handed backhands – Federer is fundamentally a more attacking player and has the far superior serve and backhand.

Looking ahead to Friday afternoon at Rod Laver Arena, Federer said, “Grigor’s got the game to be really dangerous.”

He should be wary. A year ago, Andreas Seppi knocked him out of the tournament at this same stage.

Despite the distinction of having reached all four Slam semifinals and being Wimbledon runner-up in 2010, Berdych’s exceptional easy power should have been better rewarded.

While it took him 16 Grand Slams to get to a quarterfinal, Kyrgios has already reached two in just 11 tries.

He has beaten Rafael Nadal (Wimbledon 2014) and Federer (Madrid 2015) and thrives on the big occasion. Berdych knows that, noting about Kyrgios, “he definitely has a game to play big matches, play big opponents.”

The Rod Laver crowd on Friday night will be barracking en masse for the charismatic Kyrgios.

“Whatever the crowd’s going to be,” the sixth-seeded Berdych insisted, “it’s just about myself and how I’m going to be focused.”

There won’t be as rowdy an atmosphere when headliners Maria Sharapova and Serena Williams play at Rod Laver in the day and night matches respectively. Williams, facing 18-year-old Daria Kasatkina, only allowed her opponent three games in the last round, while Sharapova did likewise and now faces the petite Lauren Davis.

Neither as yet has called on a legendary champion for coaching inspiration in the manner of Andy Murray/Ivan Lendl, Novak Djokovic/Boris Becker or Federer/Stefan Edberg.

The Swedish six-time Grand Slam champion is no longer with Federer. “It was always very special looking up to the player box and seeing Stefan,” Federer said Wednesday about life with Edberg the past two years, “somewhat surreal to have him support me.

“It was his (50th) birthday yesterday. I congratulated him. Of course I miss him. It’s normal. He was a great asset on the team – nicest guy ever.”