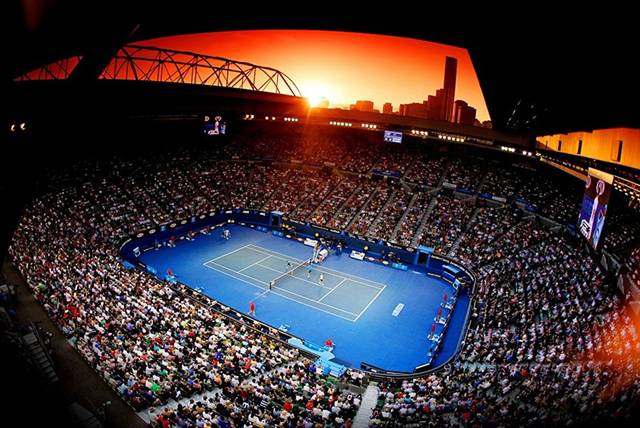 Times have changed in tennis. Decades ago it was easy to dislike bad boys such as Jimmy Connors, John McEnroe and Ilie Nastase. Nowadays the best players – Novak Djokovic, Roger Federer, Rafael Nadal and Andy Murray – are undeniably good guys.

Who would not be charmed by Djokovic on Tuesday night when asked if his son Stefan, at home in Europe with wife Jelena, recognises his father on television. “Yes, he screams ‘mama’ when he sees me on TV,” Djokovic laughed. “I accept that. I still think it’s cute.”

Djokovic is also as good as any player at making time for his fans. But the fact remains that about 90 per cent of spectators at Rod Laver Arena on Thursday evening will be barracking for Federer in their semifinal.

Underlying that support is the fervent wish the Swiss maestro can win another Grand Slam title – an 18th. “It would mean a lot to me, no doubt about it,” he said on Tuesday after beating Tomas Berdych.

There has been little drop-off in the 34-year-old’s level of play, but the fact remains that since winning the 2010 Australian Open, he has played 23 Grand Slams and won just one – Wimbledon in 2012. In the previous 25, he won 15.

Djokovic’s imperial form is a big reason for that. Last year he was 5-3 with Federer. But look closely, he won the most important match-ups – finals at Wimbledon, the US Open, the ATP World Tour Finals, Indian Wells and Rome.

And the conditions at night, Federer has made very clear, are demonstrably slower than during the day, favouring Djokovic’s superior defense.

But Federer controls his own destiny as he presses the issue and tries to win points at the net. He was 23 for 28 (83 per cent) against Berdych. “He (Djokovic) will be hitting passing shots and I’ll be there attacking,” Federer said. “I’ll be the one controlling the match in a way so I accept that. I have to hold my service games because by holding it puts pressure on Novak.

“I know he’s really, really good, but he’s not a mega-server so he still lets you play. For me that’s good because I like to have time.”

Time management and execution, that’s the recipe for Federer … and all Federer fans.

In Thursday afternoon’s women’s semifinal against Angelique Kerber, 24-year-old Johanna Konta will be up against a wily top-10 player – a tall order for the erstwhile unheralded No. 47-ranked Brit.

Serena Williams takes an 8-0 head-to-head into her semifinal against Agnieszka Radwanska. The ray of hope for the 26-year-old Pole is that the only set she won was in a 6-1 5-7 6-2 loss to Williams in the 2012 Wimbledon final.

Williams claims the Aussie Open is, “the only tournament that when I lose early, I hang out until it’s over. It’s like I never want to leave here.” Losing early for the almighty Serena would even be the semifinals. Still, chances are slim she’ll be doing much hanging out this year.

HOT TIPS
Roger Federer def. Novak Djokovic in four
When two fantastic, all-time greats keep playing each other – now four times in the past seven Grand Slams – the law of averages says there’s bound to be a surprise. Federer the great, 34, pulls one off at Rod Laver Arena on Thursday night.

Angelique Kerber def. Johanna Konta in two
The 28-year-old German needs to come down from the high of her first career win in seven tries over Victoria Azarenka as she tries to reach her first Grand Slam final. That’s tough, but even tougher is Konta, 4-8 in Grand Slams before this fortnight, making the final in her very first Aussie Open.

MUST WATCH
Roger Federer v. Novak Djokovic
It’s the most competitive elite match-up in men’s tennis these days, and the head-to-head is a dead even 22-22. Over the last 22 matches it’s been 13-9 for Djokovic; in the first 22 it was 13-9 for Federer.

HEADS UP
Federer is interested in a wide range of summer and winter sports. Recently he told the Straits Times, “I always liked figure skating – I like beauty in motion.” It’s probably not a stretch to imagine that many figure skaters enjoy watching a certain Swiss tennis player for the same reason.

FUN FACT
There were three sets of sisters in the Aussie Open: Serena (1) & Venus (10) Williams, Agnieszka (4) & Urszula (108) Radwanska, and Karolina (12) & Kristyna (114) Pliskova. Serena and Venus both at No. 1 are the highest-ranked siblings ever. In second spot are Bulgarians Manuela (3) and Magdalena Maleeva (4). A third sister Katerina was No. 6.

This article was published on www.ausopen.com. Our latest tennis picks can be found here and do not match the ones in this article.