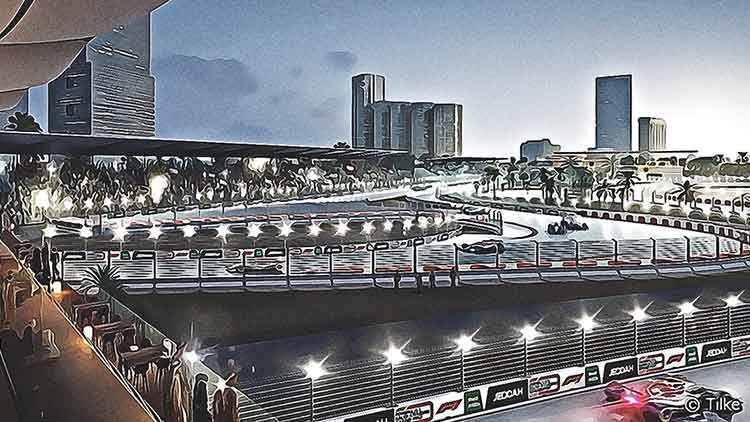 This is the 21st and penultimate weekend of this year’s Formula 1 calendar, in yet another new Middle Eastern destination, Jeddah, Saudi Arabia.

It’s been two weeks since the race at Losail in Qatar and Lewis Hamilton’s dominance from start to finish. The Briton was never threatened for the lead, even when Max Verstappen moved up to second and had the chance to push the Mercedes driver. However, the Dutch Red Bull driver settled for second place as the best result he could get, playing safe because of his lead in the standings. After many years, it was 2014 in particular, Fernando Alonso was back on the podium. He was excellent from start to finish and held on to third place, winning his 98th career podium and Alpine’s second this year, following Esteban Ocon’s victory in Hungary.

2022 is ready to follow, but it will without a legend of the sport. Sir Frank Williams has passed away at the age of 79. An iconic figure and a name written in gold letters in the history of Formula 1, creating one of the most historic and enduring teams. Last season his family left the sport following a takeover of the team, but the name remained after the new buyers’ wishes.

Sir Williams has gone through many hardships over the past years trying to keep the dream of the team alive and is a prime example of how respect is earned, not demanded. When he retired from his duties, he stayed with his family giving advice and the respect he had from others in the paddock and from the world at large was admirable. Many drivers, particularly those from Williams, pay tribute at this Grand Prix to the ‘immortal’ Sir Frank Williams, who left a huge legacy to the pinnacle of motorsport.

Pole position and Grid in Jeddah

Formula 1 continues in the Middle East and travels for the first time to Jeddah, Saudi Arabia. An unusual track, on the streets of the industrial side of Jeddah, which has been left unused for several years. There are 27 corners with three DRS zones, but the layout is very fast and times are under 90 seconds. Several laps by everyone in free practice and with mistakes that could be “paid for” as a city circuit is flanked by walled boundaries for most of it. Mercedes seemed to have better pace than everyone, with Ferrari following instead of Red Bull who will have a tough task on Sunday.

Qualifying turned into a thriller, with pole position decided on details. The two Mercedes were holding the ‘1-2’ with Lewis Hamilton being the quickest, but Max Verstappen’s last ditch effort was impressive and he would have taken the lead on Sunday’s start. However, the Dutchman had a blockage in the final sector and on the exit of the same corner he lost the rear of his car and abandoned the attempt. This resulted in the lining up of Mercedes on the front row of the grid with Hamilton – Bottas and Verstappen following. Charles Leclerc had the fourth best time with Sergio Perez and Pierre Gasly following. Lando Norris and Yuki Tsunoda are next, with Esteban Ocon and Antonio Giovinazzi completing the top ten.

This is a Grand Prix that we have been waiting for with great anticipation and the action has already started peaking on Sunday night. Most people will be focusing on the start, which will be a major feature, but there will be action in all of the race.

For Sunday’s race we predict a winning margin of less than five (5) seconds at the odds of 3.80 and the number of classified drivers Under 16.5 at 1.80.