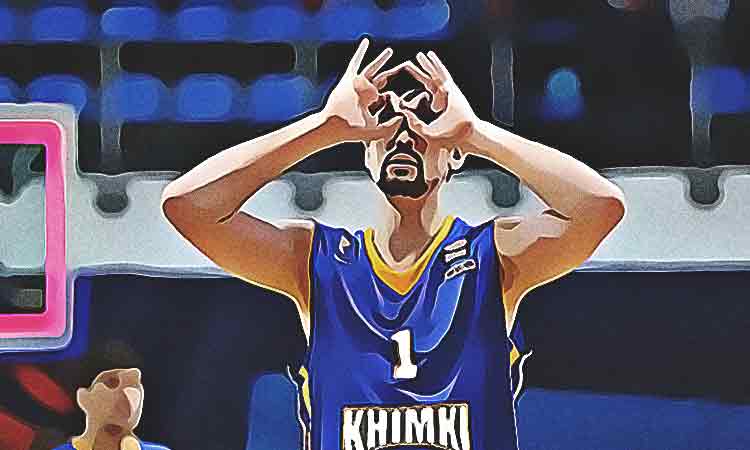 A pair of Russian clubs eager to snap losing streaks meet in Friday’s first game when Khimki hosts Zenit. Khimki, which is starting a three-game homestand, is on the fringe of the playoff zone at 8-9. The team hopes to have the services of scoring ace Alexey Shved, who missed last week’s loss to Efes in Istanbul. Zenit, which is last in the standings at 4-13, is 3-6 on the road.

Khimki not only boasts the second-highest scoring average (87.1 ppg.) in the league, it takes that to a higher level in home games (91.3 ppg.). Zenit is last in the league in scoring (73.4 ppg.). In three of Zenit’s wins, it has kept the opponents to 70 points or less. Khimki needs to control the pace, keep its scorers happy and keep putting the ball in the net to have a good shot at beating Zenit again.

Zenit leads the league in offensive rebounding with 12 per game and Khimki allows the second-most offensive boards (11.7 per game). Zenit center Gustavo Ayon ranks fourth in the league with 2.4 offensive boards per game. Dominating the offensive glass also won’t be enough to lift Zenit in Moscow, but a handful of extra second-chance baskets would be a good start.

After a three-game losing streak capped by a 30-point road loss against Zvezda, Bayern this week let go head coach Dejan Radonjic and replaced him with assistant Oliver Kostic. The team will want to react to its situation with a much-needed win in front of its home fans. CSKA lost in overtime against Panathinaikos in Round 17 and lost a key player, Janis Strelnieks, indefinitely to injury. Greg Monroe (12.1 ppg.) has been Bayern’s top scorer until now, followed by Vladimir Lucic (11.8) and Maodo Lo (10.1). Mike James (20.6), Darrun Hilliard (10.1) and Kyle Hines (8.9) have led CSKA until now.

Bayern was heavily outrebounded in Belgrade, 37-29, and shot the ball with very low percentages from all distances (45.2% 2FG, 19% 3FG, 59.1% FT). It leads the EuroLeague in turnovers (14.8 per game) but managed to pick up just 10 last week. A better ball circulation is expected with T.J. Bray back from injury as the team will try to spread the floor to get its best shooters – Lucic, Petteri Koponen and Nihad Dedovic – better looks at the basket.

Bayern released guard DeMarcus Nelson at the end of his contract.

CSKA leads the competition in three-point shooting percentage (40.2%) despite taking more shots from downtown (28.9 per game) than any other team. Without Strelnieks, players like Hilliard and Ron Baker must step up and use their extended playing time to supply some of what’s missing. Joel Bolomboy, Johannes Voigtmann and Andrey Vorontsevich give CSKA a size advantage in the paint and the Russian powerhouse must make the most out of it.

CSKA travels to Munich without points guards Strelnieks, who is out long-term, and Daniel Hackett, who injured his finger. However, another point guard, Mikhail Kulagin, has returned from his long-term injury to play in a weekend domestic game.

Two teams tied in the standings will square off on Friday to start the second half of the season when ASVEL Villeurbanne (8-9) welcomes Crvena Zvezda mts Belgrade (8-9) to the Astroballe in Villeurbanne, France. ASVEL is strong at home this season, where it has won three of its last five games. Zvezda has won six of its last eight games and currently rides a three-game winning streak. Because ASVEL won their first meeting in Belgrade, this game will not only break their current tie but will have implications if they are tied at the end of the regular season, too.

ASVEL is particularly strong at home this season and is facing the only team it has managed to beat on the road. However, they are essentially tied since overtime points do not count in tiebreaks, so winning the game is practically the only option for the hosts. ASVEL will have to focus on rebounds and make sure that its physical defense gets the job done. Missing Edwin Jackson for a couple weeks with injury will not help, however.

Zvezda wants to extend its winning streak and take revenge from the Round 8 loss in the process. However, ASVEL feeds off the Astroballe energy, so the guests will have an added factor to deal with in their plan. Zvezda seems to have the upper hand on the defensive end, so exploiting it would probably be the way to go. At the same time, Zvezda’s league-worst 47.6% on two-point shots should improve in order to make better use of those defensive skills.

Stratos Perperoglou is sidelined and James Gist is doubtful. Due to personal reasons, Charles Jenkins travelled back to the States and will miss the game against ASVEL.

Barcelona is 7-1 at home this season and won its last three games at Palau Blaugrana. Efes is 7-1 on the road and its only loss came in October. The Turkish powerhouse is currently on a six-game road winning streak. Nikola Mirotic (18.8 ppg.), Cory Higgins (12.4) and Brandon Davies (9.6) have been Barcelona’s top scorers until now. Shane Larkin (20.2), Vasilije Micic (14.2) and Tibor Pleiss (8.9) have led Efes so far this season.

It all starts with defense for Coach Svetislav Pesic’s team. Barcelona allows just 77 points per game and holds opponents to a league-low 8.7 offensive rebounds on average. Controlling the defensive glass allows Barcelona to spread around its offense; as many as 9 players average 5 points or better this season. Stopping Larkin will be critical in this game, and Barcelona will rely on Hanga, Kyle Kuric and Pau Ribas to do so.

Efes is the third-best scoring team in the competition (86.6 ppg.) despite ranking eighth in assists (17.9 apg.). Micic, Larkin, Rodrigue Beaubois and Krunoslav Simon find advantages in one-on-one situations and the whole team has been really effective, hitting 57.5% of its two-point shots and 39.5% from downtown. Efes is also deadly from the foul line (84.9%). As always, Larkin and Micic will be the key, as Efes runs its entire offense through its star point guard duo.

Two teams moving in opposite directions will clash on Friday to start the second half of the regular season as Valencia Basket (8-9) hosts Olympiacos Piraeus (6-11) for Round 18. Valencia is clearly on the rise after a slow start to the season, having won four of the last five games. The Reds have lost five of their last six, including three in a row, but come to town with EuroLeague scoring king, Vassilis Spanoulis, fresh off establishing the new all-time points record last week.

It took some time, but Valencia rolling and aims to stay that way at home against Olympiacos. The fact that the guests will miss Milutinov could give the hosts, led by big man Bojan Dubljevic, a strong advantage in the paint. Both teams are more balanced stats-wise than the standings might suggest, but Valencia’s fifth-ranked PIR (93.5) is a solid reason why the hosts can trust in their game and use the force of the La Fonteta fans to start the second half of the season on an even higher note.

Olympiacos, struggling at this moment, has a tall task to get back on its feet on the court of one of the most in-form teams of recent weeks. The Reds will be missing their starting big man, but as always will face the game with their classic character. One of the main flaws of the guests this season is their 73.3% free-throw accuracy, third-worst in the league. That’s something they will want to pay attention to should the game reach a close finale, which is completely possible given how similar the numbers are between these teams.

Will Cherry and Willie Reed did not travel with the team at Spain. Brandon Paul is injured, but he traveled with the team, as well Nikola Milutinov. Milutinov will continue his therapy in Spain and if he feels better, he may take some minutes against Valencia.

Standings provided by Sofascore LiveScore
Related Topics:euroleague
Up Next

Euroleague Tips with Previews – Round 19 – Tuesday

Euroleague Tips with Previews – Round 18 – Thursday

To make up for Round 18, Milan hosts ALBA Berlin on Tuesday. Because of COVID-19 instances in the Milan team, the game was postponed. On the road, Sergio Rodriguez and Malcolm Delaney combined for 33 points in Milan’s Round 20 victory over FC Barcelona. After beating AS Monaco in Round 17 on December 22, ALBA (6-11) will play its first EuroLeague game. Marcus Eriksson scored 21 points on 5-of-8 three-point shooting in ALBA’s 81-76 win against Milan earlier this season in Berlin.

Thursday is a big day for French basketball. LDLC ASVEL Villeurbanne will play against AS Monaco on Friday. Both teams have just won, which they hope will start a run in the standings that will get them into the playoffs, so they’re both excited. AVEL (8-9) beat Fenerbahce Beko Istanbul (9-9) in Round 17 to end a four-game skid. Their last round 18 match was called off last week. Maccabi Playtika Tel Aviv lost to Monaco last week, but now the team has two wins out of its last four games. Monaco is now 7-11. ASVEL has a record of 5-4 at home this season, while Monaco has a record of 2-7 on the road so far this season. There were two games between these two teams last month. ASVEL won by one point at home, and Monaco won by two, also at home, but for the French League.

FC Bayern Munich hosts AS Monaco on Thursday in a showdown between two teams on the outside of the playoff zone with the hope to make a run in. Bayern (8-10) comes off a victory over Zalgiris Kaunas on Tuesday in which Ognjen Jaramaz scored a career-high 16 points. Monaco (7-11) won its last game against Maccabi Playtika Tel Aviv, but that was two weeks ago. While the 2021 EuroCup champs will have fresher legs, they may also be rustier. Bayern is 6-3 at home this season and Monaco has lost seven of its last eight road games. When they met earlier this season in Round 9, Monaco pounded Bayern 94-71 behind 18 points and 5 assists from Mike James.