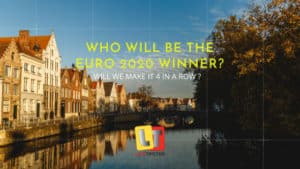 As you will of course be aware, the Euro 2020 is being held a year late due to the global pandemic. The effects of COVID-19 are still being felt and have led to the matches being played with reduced fan attendance and restrictions, as well as the teams being expanded from 23 to 26 players. At least the competition has retained its official title, UEFA Euro 2020.

But withouth any further ado, let’s jump into our predictions for the Euro 2020 winner.

The most important factor, which creates the uncertainty in this prediction – no rush, it’s not Covid-19 – is the ‘group of death’; the coexistence in the same group of France together with Germany and Portugal (Hungary is completing the pack). Over the last few months I have been “locking” in Portugal to repeat the success of 2016, but in such a group the fear of being eliminated from the group stage is real. Plus, Cristiano Ronaldo is 5 years older.

Should one predicts France as the Euro 2020 winner, then the same is true, a bad result against Germany in the opening match can see them in trouble. Don’t forget that as World Champions in 1998, they didn’t even qualify from the group stage at the next World Cup in 2002.

Bottom line, I reckon Portugal will qualify because of the opening round when France and Germany crash into each other.

However, I believe the winner of the Euro 2020 will be a team that:

The impact of fatigue

Clearly, fatigue was an element that my group and I took into account in our evaluations. There are national teams whose players are considerably more overworked than those of other countries. A shining example is England. England’s teams made up 3/4 of the Europa League (26 May) and Champions League (29 May) finals. With that in mind, we also ruled out England as winners despite being the primary host of the Euro.

Which is left based on the above evidence? A team that has developed into a football school over at least the last decade, that has… continuation in the selection of coaches and players who “fit” into the existing plan and whose incredible batch of players for these 10 years have reached the highest level of maturity.

A squad with a number of champions in club level, players who have been drafted by some of the biggest clubs in Europe. A team with a coach who is not afraid. A team from a small country, the country where the most important decisions about Europe are taken.

This forecast doesn’t carry the same weight as any decision they make in their capital city, but you can see after predicting the last three winners of Euro 2008, 2012 and 2016, it holds its own weight.

We predict that the winner of Euro 2020 will be BELGIUM.